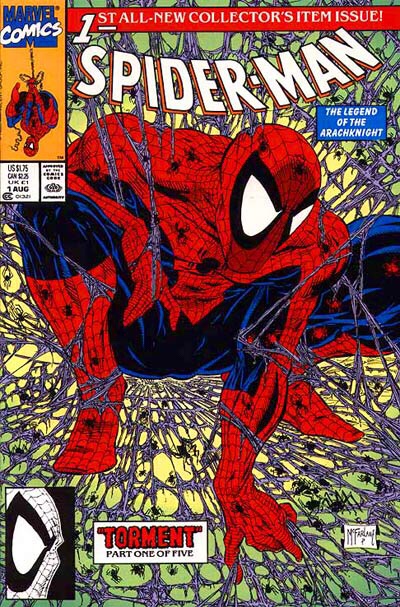 I was listening to Thanks For Supporting Random: Mega Ran Mix Tape vol 2 (available at MegaRan.com) this morning, when his track “Played a Fool” came on. Ran raps about a day when he was short on dough, and decided to sell his copy of Spider-Man (1990) #1 (pictured above) to the local comic shop. Much to his surprise, the comic store owner offered him $1.75, and explained that Marvel had printed 3 million copies of that comic; it’s not rare or valuable.

Having worked in comic stores for over half a decade, this EXACT scenario happens more often than you’d think. Like, almost daily. People would come in with their comics and expect us to give them a top-dollar payout, without having researched how selling comics to shops actually works. Stores can’t operate at a zero-profit. If you bring in a comic that’s valued at $100, most shops will over you $30-50 for it. They aren’t ripping you off, they’re trying to pay rent. If I gave you $100 for the comic, and then turned around and sold it for $100, all I’ve effectively done is waste my time. I did some work and made no money for my efforts.

Besides that, selling comics isn’t as easy as just putting stuff on the shelf, and then someone is gonna come in 5 minutes later and buy it. As a retailer, we’ve gotta go thru the comics, make sure all the pages are intact, make sure there are no creases or tears anywhere, usually put it in a new polypropylene bag and backing board, and then find space for it somewhere on the sales floor. That process doesn’t take too long for one comic, usually 3-5 minutes, but when someone brings in a collection of 15 boxes full of 100+ comics each, that 3-5 minutes per comic is suddenly hours and hours of inspection and research, because, surprise, not every comic store employee knows every detail about every comic ever.

Additionally, if you’re looking to sell your comics, get an idea of what they’re actually going for. Check eBay, and look at the SOLD LISTINGS option. Just because someone LISTED a $5 comic for $250 doesn’t mean the value spiked, it means that seller is either a moron, or trying to rip off a sucker who didn’t do their research. If a book’s selling for $5 or less, you’d be lucky if a store gave you a dollar for it.

Those of us that grew up in the late 80s and early 90s were told that if we kept our collectibles in “mint condition” and held on to them for years and years, we’d get a huge return on that investment. And that’s just not true. In the 100-year history of comic books, you’re only going to ever run into a handful that came out in your lifetime that are worth more than ten bucks.

So, maybe don’t worry so much about keeping your stuff in “mint condition.” Maybe take your comics out of their poly bags every so often. Maybe actually read and enjoy your paper entertainment.

Comics are fun, yo. If you want to invest money in something, go learn the stock market.

All content © Psycho Andy unless otherwise noted, or obviously not.